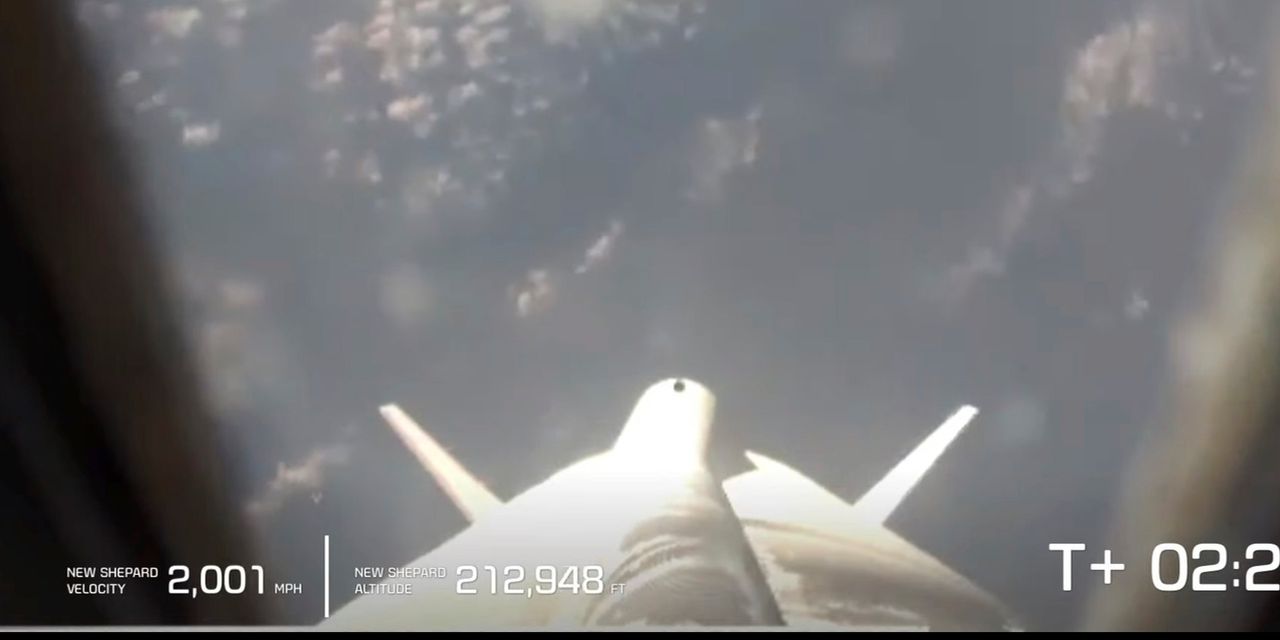 and three passengers reached the edge of space and safely returned Tuesday morning after a flight of just over 10 minutes that the billionaire businessman hopes will kick-start an expansive new era for human space travel.

founder and his fellow passengers were launched at 9:12 a.m. ET to the edge of space from a remote West Texas site and enjoyed a few minutes of weightlessness aboard the rocket-powered New Shepard spacecraft developed by his company Blue Origin LLC.

The vessel’s crew capsule floated down under its three parachutes to a spot in the desert, a few minutes after the reusable booster returned—following two sonic booms and blackening the pad as it landed.

“It felt so serene and peaceful, and the floating…it’s a very pleasurable experience,” Mr. Bezos, 57 years old, said of weightlessness at a press conference after his flight.

“What we’re doing is the first step of something big,” he said, comparing the current stage of private space flight with the barnstorming phase that helped foster commercial aviation. “Big things start small,” he said, adding he did something similar with

about three decades ago.

Tuesday’s space flight was Blue Origin’s first with passengers on board, a group that included the world’s wealthiest person—Mr. Bezos’ net worth amounts to more than $200 billion, according to Bloomberg—as well the oldest-ever space traveler and the youngest, 82-year-old aviator

50, the co-founder of private-equity firm HighPost Capital and Jeff Bezos’ brother, also was on the trip.

Blue Origin said it had opened ticket sales for future flights, and Mr. Bezos said it had amassed $100 million in sales, with two more crewed missions planned this year. It hasn’t given details on pricing.

The company had hoped to start tourist flights on the New Shepard years earlier, according to Mr. Bezos’ past comments about the craft. But by ferrying the four passengers to an altitude of more than 62 miles and getting them back to Earth on the RSS First Step capsule, Blue Origin demonstrated some of the engineering and rocketry prowess it has been developing.

Space flights are risky, and the vehicles that companies have designed to ferry humans to space have been tested a fraction of the number of times that are typical for commercial planes. The fully autonomous New Shepard rocket system has now completed 16 trips.

Mr. Bezos founded Blue Origin in 2000 and began acquiring land in Texas to build the private facility used for Tuesday’s launch. The company hired staffers to develop rockets, engines and spacecraft and now employs more than 3,500 people at facilities in Florida, California and other locations.

At the facility in Texas, New Shepard took off with a sustained roar, a flame visible as it powered into space. A couple of minutes later, the vessel reduced to a speck in the sky and then disappeared. One Blue Origin employee stood with her hands on her knees, overcome briefly by emotion. Others applauded and hugged each other.

The flight was timed to coincide with the date in 1969 when the Apollo 11 mission landed on the moon. In speeches, Mr. Bezos has cited that event as a key moment during his life and stated his conviction that humanity must establish outposts in the solar system where people could live.

Mr. Bezos has said he has invested around $1 billion annually in Blue Origin in recent years.

Mr. Bezos said on Tuesday that he would split his time between Blue Origin and the Bezos Earth Fund focused on climate change and sustainability. “And there’s going to be a third thing and maybe a fourth thing, but I don’t know what those are yet,” he said.

Blue Origin is looking to gain traction in a space market that has attracted fresh investor attention, with hundreds of millions of dollars poured into startups and listed companies. Space flight has long been dominated by government agencies. However, more companies are working to position themselves for a sector that some analysts believe may grow rapidly in the coming decades in tandem with technological advances.

has estimated that space-related revenue could triple to more than $1 trillion by 2040.

traveled with five others about 54 miles up in a company spacecraft, a flight meant to help spur tourism in space. Later this year, Space Exploration Technologies Corp., the formal name for

SpaceX, plans to take four commercial passengers into orbit on one of the company’s Crew Dragon capsules. SpaceX also has been completing launches for commercial customers and government agencies.

The launch was originally meant to include the person who paid close to $30 million in an auction for a seat. Last week, Blue Origin said Mr. Daemen would be on the ship instead because the winning bidder had a scheduling conflict. The company hasn’t disclosed who won the auction.

Will billionaires’ going to space help or hinder exploring the final frontier? Join the conversation below.

Blue Origin is targeting a broader set of business goals beyond space tourism, including a push to win contracts with the National Aeronautics and Space Administration and other government agencies.

Last year, Blue Origin was part of a team that competed to develop a new moon lander for NASA’s Artemis program, which seeks to return American astronauts to the moon as soon as 2024. The agency chose SpaceX to develop the initial lander, but Blue Origin filed a protest over the contract decision.

Blue Origin has spent years working on the New Glenn, a 321-foot rocket designed to lift major payloads into orbit. The space company also has been building a new engine for United Launch Alliance, a joint venture between

Write to Micah Maidenberg at micah.maidenberg@wsj.com and Doug Cameron at doug.cameron@wsj.com

Pandemic Handling Gets Mixed Reviews Across US, Europe

A New CAMX for a New Time